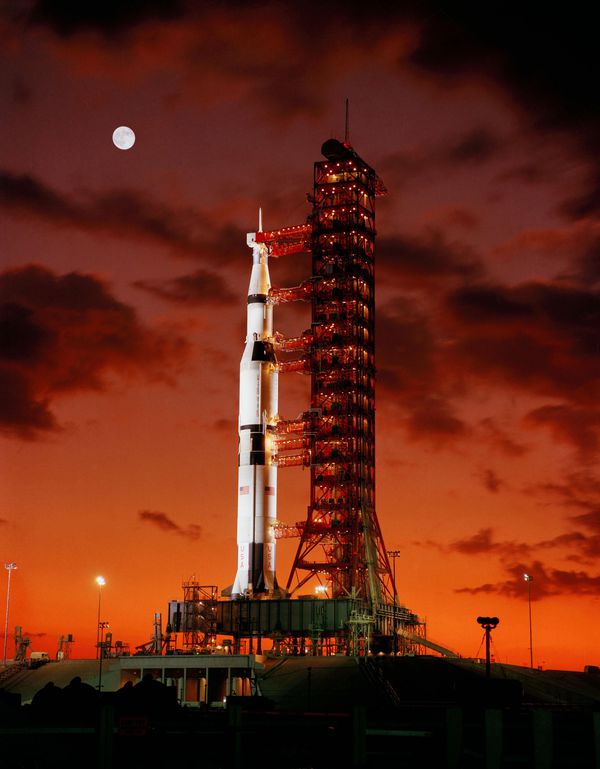 Heads in the Clouds or Feet on the Ground

The tumult of the 60’s in America included the ongoing conflict in Vietnam, the Civil Rights Movement, the ERA movement, assassinations and a cultural revolution the likes that had never been seen. It culminated in an event that changed the country and the world permanently. 2019 marks the 50th anniversary of the Moon Landing of Apollo 11 when Neil Armstrong became the first human to set foot on the lunar surface. It set forth changes to humanity that last to this day and will continue to be felt. In 1969 not everyone had this opinion, however.

By the time Armstrong, Aldrin and Collins were headed to the Moon, the Vietnam war had cost the American taxpayers as much as $100 billion dollars while poverty had continued to rise. The investment made in NASA continued to raise eyebrows, particularly after the tragedy of the first Apollo mission which killed three astronauts on the landing pad. Income disparity was at an all-time high and the country was still reeling from the assassinations of Robert Kennedy and Martin Luther King Jr. On a practical level, the expenditure that the government was making to go to the moon seemed a frivolous one that ignored the social issues of the time. Many questioned if the money would be better spent on social welfare or even ending the war.

John F. Kennedy stood before a crowd in 1961 and promised that the nation would send and return men to the moon before the decade’s end. A bold declaration considering the space program scarcely existed at the time and the technology that would eventually land us on the Moon had yet to be invented. True to American pioneering spirit, the years following the President’s announcement witnessed the birth of NASA and a burst of ingenuity that helped define the 60’s generation. Nothing short of a modern miracle, nine years later Armstrong and Aldrin actually made the first human footprints on the lunar surface. Millions watched around the world: the space-age had arrived.

It’s a question that may be asked forever but many wonder if the pursuit of landing on the Moon was worth it. It continues to be a question repeated today with renewed aspirations to return to the Moon and travel beyond, to Mars. Modern societies still face many of the same problems that the 60’s and 70’s societies did: poverty, war, class disparity, racism, sexism and now add in climate catastrophe to complicate matters. As pointed out by the Smithsonian article, linked above, the Watts neighborhood still only has one grocery store 50 years after the Moon landing. For all of the knowledge and technology gained from the space program, basic fundamental issues of equality still face hurdles. Even if the U.S. hadn’t decided to send astronauts to the Moon, where would the funding have ended up? Surely more would have been spent on the war in Vietnam but can we really believe that the country would have invested in addressing the Civil Rights issues of the time or in reducing the wage gap? Our country has more wealth today yet the income gap has increased. The same groups still protest unequal treatment and in some ways it appears as if these claims are even more valid in a day and age where space-age technology defined the generations of today and were supposed to make everyone’s lives easier and better.

Despite apathy and even resistance resistance to the Apollo missions, the long term-benefits and impact of the program cannot be underestimated. Beginning with the obvious gathering of knowledge, Apollo and contract engineers were tasked with developing systems and machinery that had never been attempted and did not exist. Computer systems, navigation systems, vehicles, rocket science and details of minutiae including the space suits and geography of the Moon itself had to be understood completely. Testing and retesting to ensure success was the standard. As for the astronauts themselves, training was beyond anything ever engaged before. Their success can be gauged by the only fatalities of the program occurring not in space but on Earth during a test launch due to equipment failure. The effort also engaged thousands of individuals working together to successfully execute each test fire, building phase, equipment check and, eventually, full fledged mission. Many of these individuals were not given credit for their roles until years after the missions. The media campaigns to gain support for NASA however showed a side of the country many had not expected to see. Women and minorities played significant roles in making the successes possible and this did not go ignored by the American public. With the Civil Rights and ERA movements very much relevant, the space race not only displayed the extraordinary efforts of astronauts and scientists, but many working behind the scenes to make the effort a success. This included women in the field of science for the first time and the first black man to train as an astronaut.

The long term result of the Apollo missions reaffirmed America’s determination and dedication to innovation and leadership. At a time when the Cold War was near its peak and the space race was a major source of national pride, Apollo 11 was the moment we broke the ribbon at the end of the marathon. American pride soared, but perhaps not unexpectedly, the success was shared by not just our country but the entire world. Even those who had protested it bitterly at times recognized the significance of the achievement. Fittingly, the astronauts who completed the journey and returned to Earth were adored and showered accolades as heroes. 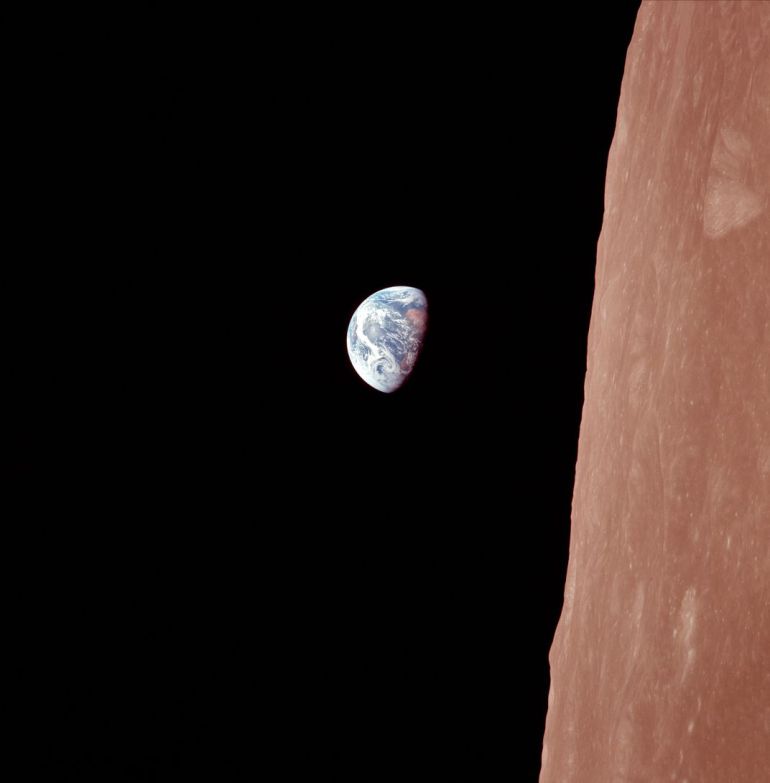 Like the Moon shots of the Apollo missions, astronomer Carl Sagan influenced an entire generation by bringing the science of space into everyday life with his relatable narratives and descriptions. Previously, the science of space and space travel had been fodder for either science alone or science fiction. Information gathered in subsequent trips to the Moon and missions to the outer solar system increased our knowledge of how the universe works and the potential of what lies beyond our comfortable home planet. As one of the photographs taken by the Voyager capsules, Earth appears tiny and almost insignificant in the vastness of the cosmos. To date, Earth is the only place in the universe we have confirmed life. We’ve not traveled far but learned a tremendous amount about the larger, galactic ecosystem of which we are a part. In going to our nearest interstellar neighbor, we also learned as much about ourselves as we did a new environment. Most notably, that as a whole we can accomplish great things.

Perhaps the chord that resonated most harmoniously from July 20, 1969 was not so much that one country achieved the unthinkable, but that the country that did represented so much more than one race, creed, belief or government. America is every country, as was designed since its founding. Throughout the space missions, the astronauts who gazed back at our planet as the first and only individuals to have ever done so, were struck by the profound reality of seeing the Earth in a unique perspective. From space there were no lines to separate countries or nationalities, races or religions. From space there was only one world; the only world we have ever known. The astronauts eloquently expressed this when addressing Houston from space. Quoting of the Book of Genesis on Christmas Eve or the capture of the famous photograph “Earthrise”, these were not actions that were addressed only to the United States of America alone but exemplified goodwill towards our planet and entire race.

Here men from the planet Earth first set foot upon the Moon July 1969, A.D. We came in peace for all mankind.

The day that Neil Armstrong and Buzz Aldrin left the first footprints on the Moon defined and shaped a generation and every generation after that. Today we have cellphones and watches with more computing power than their tiny capsule had. We have the internet and solar panel technology. Our TV’s are the thickness of a credit card and 1000 music albums fit on something the size of your thumbnail. And we still have the same social problems and fears that plagued us 50 years ago. Our leaders do not lead and our citizens often do not participate to change that. Going to the Moon did not change human nature. What it did do was show what humans can do when they are at their best. It proved that women can be equal to men and that color did not matter; revelations in that time period. The sad fact is that beliefs and behaviors of that time still persist and the example that was made by humanity’s finest hour is quickly forgotten. If we return to the Moon it will hold different meaning, it will be expected. It will be more of a victory for “our side” if we are the first back or to do something new. 1969 was something new, it was something innocent so it could be filled with meaning. If that was the only time that we considered ourselves one race on the one planet with life, then it was worth it. And it is worth revisiting for that significance alone.